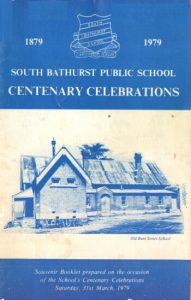 South Bathurst was originally known as Milltown and was considered the railway man’s town. The railway arrived in Bathurst in 1876. The Milltown Public School was built in Bant Street in 1879. Following a fire the school was rebuilt in Havannah Street and opened in 1968. The book includes a list of Head Teachers from 1879 until 1973 and also a list of names of Pupil Teachers from 1879 until 1907.

This book is listed here because it may be of interest to those who are researching people associated with the Bathurst district.
The Family History Group of Bathurst does not necessarily have access to a copy of the publication and makes no claim regarding the availability of the book.
The book may be available at your local library or through an inter-library loan or the book may be available for purchase in Bathurst but not elsewhere. In the last case, the Family History Group of Bathurst Inc. may be able to purchase the book on your behalf and post it to you at cost.